Location Does Not Matter. 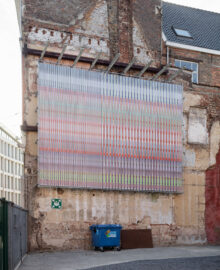 Stephanie Specht (°1982) is an Antwerp-based graphic designer who graduated from the Royal Academy of Fine Arts (Antwerp) in 2004. Having lived and worked pretty much everywhere in her 14-year career (Cape Town, Brussels, Princeton, New York, Antwerp), every single one of these experiences shaped her as a creative person. The integration of intuition in her work has recently become increasingly significant to Specht. The ability to reinvent herself from time to time is of high importance; when the need for change is there she wants to act upon it. Freedom is the most vital element in her life.

Each billboard stays up for two months.
The designers are selected by 019.
Photography: Michiel De Cleene
Billboard framework: Olivier Goethals