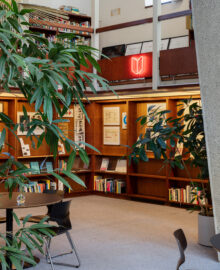 Welcome to the The Serving Library. A library in a library; a reading room (1), a collection of 95 framed objects (2) and a satellite seminar room (3).

*The Serving Library Annual produces an eclectic cultural journal of mostly new writing in distinct online and print formats. These discrete texts, or “bulletins,” are released simultaneously on www.servinglibrary.org, where they can be downloaded for free as PDFs, and in print every autumn. **Bulletins of The Serving Library was a composite printed/electronic publication published by Dexter Sinister. Each of the twelve issues makes up a semester’s worth of material—original writings, reprints, and artist contributions—on a variety of themes such as libraries, media, and time; education; typography; psychedelia; Germany; fashion; numbers; sports and games; and color. The Bulletins ran from 2011 to 2017. ***Dot dot dot was a biannual, self- published, after-hours magazine, originally centred around graphic design, later broadening in scope to interdisciplinary journalism on subjects that affect the way we look at the world, how we think about and make design. Acclaimed for its witty writing about the past, present and future of visual culture and imaginative design, DDD matured into a jocuserious journal based on true stories, with subjects ranging from art design to music, to language, to literature, to architecture. Published, edited and designed by Peter Biľak and Stuart Bailey.

2. One month later, 95 framed objects**** are added to this library. The sole common denominator of the objects in this collection—which range from record sleeves, water-colors, woodcuts, polaroids, drawings, screen-prints, air-brush paintings, to a can of green paint, a German car license plate, and a ouija board—is to have appeared as illustrations in one the publications mentioned above, sometime over the last 20 years.

3. The installation of the objects on the walls of this library mid April also marks the start of a series of pubic lectures and seminars, referring to the history***** or the potential future of this project.

*****  An initial batch of about 15 items were carried in a suit-case from Amsterdam to Tallinn in 2005 for their inaugural display in a dilapidated space without electricity. Since then the collection as gradually expanded with the support of countless colleagues and institutions. It circulated through numerous host venues across Europe and North America before arriving at a home of its own in Liverpool in the summer of 2016. Originally under the auspices of Dot Dot Dot, early exhibitions of the material included shows at Kaleri Tartu, Estonia (2005), Lyon Biennial (2007), Kunstverein München (2008), Culturgest Porto (2009), OCA, Oslo (2009), Kunstverein, Amsterdam (2010), and Liveinyourhead, Geneva (2010). The collection was then incorporated into The Serving Library when it was formally established in 2011, and immediately put to pedagogical use during “From the Toolbox of a Serving Library,” a six-week summer school at The Banff Centre, Canada (2011). From there it traveled to New York, first showcased at Artists Space (2012), then part of an evolving group show called The End(s) of the Library at the Goethe-Institut Library (2013). A year later, and by now filling four shipping crates, the collection landed in the UK to hang for a season within an eccentric structure designed by French architect Claude Parent at Tate Liverpool (2014). Next was a brief stint of “Open Storage” in the foyer of The School of Art & Design at LJMU (2015) with a single object on view every few weeks, followed by another iteration as part of the group show “Resource” at Bluecoat (2015). In 2016 The Serving Library moved into its first dedicated space at the historic India Buildings in downtown Liverpool, then returned to LJMU’s Exhibition Research Lab in 2017, where it remained until late 2018. While resident at LJMU, objects from the collection were exhibited at CCA Glasgow and Kunsthalle Wien. At the end of 2018, the collection was installed at Nottingham Trent University’s Bonington Gallery, in visual dialogue with a new large commission by English artist David Osbaldeston.

From autumn 2020 onwards, The Serving Library is indefinitely installed at 019 in Ghent, Belgium, with iterations of the display taking place throughout at Ravisius Textor, Nevers, France; LLS Paleis, Antwerp, Belgium; and currently here at the Alphabetum, West, The Hague, The Netherlands.