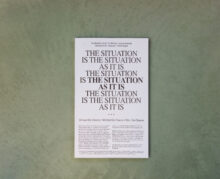 And then, as if out of nowhere, everything built became HERITAGE. The regulation would be confirmed in writing shortly, but on the telephone the office clerk left no room for doubt. Every brick, every beam and pipe, every tile, faucet and roofline had to be preserved. THE SITUATION AS IT IS, WILL BE THE SITUATION AS IT IS. The administration chose a new approach: a radical shift from ambiguous – at times obscure – decisions, procedures and decrees to an era of HYPER-REGULATION. Startled, THE ARCHITECT hung up. He looked at the list of construction sites he planned on visiting that day, grabbed his car keys and camera, and left. He wondered if, later on, his wife and kids would still be in the living room where he heard them playing now.

THE SITUATION AS IT IS** is the story of an architect’s ring binders, an archive filled with negatives and scattered subjects. THE PHOTOGRAPHS try to tell a story of an existing condition*: this is the state things are in. Within these binders buildings are perpetually unfinished. The dog keeps barking. It’s our third birthday, again.

Decades after they were exposed, these photographs appear to reveal the first traces of THE IMPASSE.***

* Documenting the existing condition (de bestaande toestand) is a legally required aspect of a building application within the context of  architecture and urban development: photographs describe a building, a landscape, infrastructure…. in order for it to be demolished, adjusted, built. The existence of the image, the document that presents THE SITUATION AS IT IS, usually implies and initiates change.

** THE SITUATION AS IT IS unfolded in 15 episodes of three frames that revolved rhythmically on a billboard mounted onto 019’s facade.

*** Part of the research project Documenting Objects, conducted by Arnout and Michiel De Cleene at KASK, the school of arts of HOGENT and Howest.

Arnout De Cleene and Michiel De Cleene form research group De Cleene De Cleene. They focus on novel ways of approaching the everyday, by artistic means and from a cultural and critical perspective. A respective background in literature and photography is combined with a common interest in documentary practices.