at the Belgian Art & Design Fair 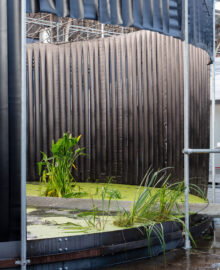 FOR ALL THE WORLD TO BE

As the italic typeface ‘2’ started tipping to the bald king, and the scarcely lifted off coin left her thumbnail bloodlessly white underneath the leftovers of yesterday’s purple nail polish from pressure against the index’s meaty inside, a strange, minor sense of anxiety crept on her. It started as an itch, somewhere deep inside the chest. It was kind of below, or behind, the heart, and unreachable – the place where stress typically lingers, preying, waiting for a situation like this one to thrive. The coin’s copper finishing caught the low afternoon sunlight reflecting of from the shallow well’s calm surface. A soft breeze tried to alter its trajectory. The nail polish was Electric Purple because that was the Thursday color she put on until Saturday’s Spanish Red.

Just minutes before she had set the coin spiraling into the breezy air, the phrasing of the wish had come to her in a flash.

The coin took its course upwards along the slope of the parabola, which was projected in all its mathematical regularity as soon as the motion had started. All was laid out: the curve (steep uphill at first, then flattening, the tipping point, then increasingly steep downwards), the moment when the coin would touch the water (4:24 PM), the time needed to reach it (2 seconds), and what side would face the surface when it would finally hit the bottom (the italic ‘2’). This was a certainty. The wish’s brevity and clarity had been overwhelming, she had felt, urging her to swiftly search for change at the bottom of her idiosyncratically filled purse. Its sheer perfection – the wish’s – made her all the more anxious. Something had gone amiss, something forgotten, which she painstakingly tried to reach for. Like the most pleasant of dreams you fruitlessly try to recall when you buzz the night five more minutes into the morning you feel will bring no good.

As the coin reached the top, and while underneath the crackled Electric Purple the nail regained its lively reddish taint, she tried to gather the attention and concentration needed. How could she possibly have forgotten the wish’s phrasing, just when shooting the coin in the air? She should surely be capable of recalling it verbatimbefore the coin would hit the water. The penny was part of the change she got when she bought a latte on her way to the office that morning, she recalled – that is, the change which she hadn’t deemed necessary to tip the Starbucks’ waiter with who had misspelled her name (two s’s) on the cardboard cup. Should one utter the wish before the coin hit the water, or before it hit the bottom? The wish’s verb had been chosen wisely and was grammatically sound, she remembered, balancing between the active – it would noticeably change things for the better – and the passive voice – she wouldn’t want to upset things all too shockingly. The construction of the concise sentence had been equilibrated so that all possible conflicting interpretations could be ruled out. It had been linguistic gold, but how strange it was, now, to recall the phrase’s properties but not the phrase itself. The coin reached the parabola’s vertex. For a moment, at the top of the curve, it seemed to be held motionless in the air at the height of her left eyebrow, which was the highest one of the two by a couple of millimeters, except when smiling, an expression that turned her face eerily symmetrical. The bald king nodded in profile.

That day, the office manager had asked for a personal exchange – his informal question clumsily concealing a formal assessment of the presentation she had given last week at the Novotel Lounge. She had hated the way he had patronizingly spoken to her from the other end of the rosewood desk. But these were thoughts she could do without right now. Time was of the essence. It was unclear what the bottom of the well consisted of – clay? fungi? concrete? – but the sun did accentuate a plethora of different coins laying there, still, amongst which she recognized, by their positioning, the other Starbucks-inspired (‘ch’ instead of ‘sh’, ‘C’ instead of ‘S’) pennies she had tossed the previous weeks, to no avail. The verb had been in the infinitive voice, yes, to avoid the subjunctive version that sounded weaker and implicated the hypothetical not-granting of it. It could but be granted, the wish, if only she could dig it up from the back of her head in time. Like a venom, the paralyzing uncertainty started flooding her veins and reached her lungs and

fingertips and eyelids. The coin gained speed, gravitating towards the half-translucent surface. The dependent clause had a subject formulated in such a way that it entailed the concrete and the abstract – of course! – and designated the largest possible group of beneficiaries. She knew that, right before tossing, she had felt utterly humbled to have found a way to name, in a short wish’s time: her sister, the only uncle she had but never met living at the East coast (the uncle), all feathered animals, the birch tree at the intersection before the office’s entrance, her cat, the cars speeding around Osaka, the school of bizarre fish swirling around the Reef, her ex’s new girlfriend, the nameless bartender at Oggilvie’s, the illiterate Starbucks employees, ships setting sail, her English teacher who had gone missing during 1993 summer recess, dad, the weeds behind the lakeside house she would visit next year, all the children in the world who were hungry and thirsty and needed a roof above their heads, the negligent concierge of her first apartment, the edible flowers pushed aside by the invasive plant and the invasive plant as well. The list went on. A delayed version of her heartbeat pounded in her throat. The harder she thought of the word to describe it all, the farther it vanished, and the more angst got hold of her. It had become another kind of anxiety, though. A more treacherous kind. Not the one induced by the replay of that day’s events at the office, nor the grammatical and semantic stress of trying to find the right formulation. This was stress for having stress, stress squared, which removed her even farther from what she actually wanted to be thinking about.

The sun was inconceivably lower than it had previously been. Two vapor trails drew a dead angle above the skyline. A different breeze, from another direction, brushed her hair between her matching purple lips. And then, all of a sudden, as the rim of the penny seemingly touched the still water, it came back, the wish, in its grammatical, syntactical and semantic purity, as an image written out in capitals before her mind’s eye, and seen, not spoken, not even whispered with the voice that utters thoughts for you alone and for no one else to hear, and the penny landed upon pennies with the bald king catching the broken light, staring to the side of the well, and all things anxious evaporated instantly, and a gulf of intense warmth and kindness and fullness seemed to sweep across the field she was standing in.

Reservoir (Wishing Well)
In 2020, artist collective 019 turned it’s exhibition hall at Dok-Noord, Ghent—a former welding factory—into a swamp. This was a direct result of opening up the already leaking roof. A combination of natural and artificial precipitation, fed with water from the adjacent canal, led to a moist environment in which plants, animals, and water-resistant and -responding artworks thrived. The swamp became an evolving ecosystem, which is, as we speak, still changing in unforeseen ways. As part of the original exhibition, works by amongst others Helmut Smits (€URR€N€¥ €O¥N $TA€K$, 2018) and Agnieska Curant (Multiverse (minus one dollar), 2012) were on view. Those works tapped into the relation between water, currency, and economy. Inspired by those artworks in Reservoir, 019 created an installation which serves as an annex to Reservoir. It digs deeper into the relation between economy and water. 019 turns its presence at BADF into a scenography for a present-day wishing well, which creates the opportunity for a possibly beneficial investment of your currency.
Aim. Choose your words wisely.