THE SERVING LIBRARY AT LLS PALEIS

The Serving Library moves to Antwerp 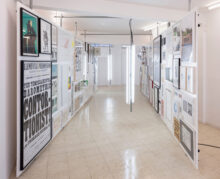 An initial batch of about 15 items were carried in a suit-case from Amsterdam to Tallinn in 2005 for their inaugural display in a dilapidated space without electricty. Since then the collection as gradually expanded with the support of  countless colleagues and institutions. It circulated through numerous host venues across Europe and North America before arriving at a home of its own in Liverpool in the summer of 2016. Originally under the auspices of Dot Dot Dot, early exhibitions of the material included shows at Kaleri Tartu, Estonia (2005), Lyon Biennial (2007), Kunstverein München (2008), Culturgest Porto (2009), OCA, Oslo (2009), Kunstverein, Amsterdam (2010), and Liveinyourhead, Geneva (2010). The collection was then incorporated into The Serving Library when it was formally established in 2011, and immediately put to pedagogical use during “From the Toolbox of a Serving Library,” a six-week summer school at The Banff Centre, Canada (2011). From there it traveled to New York, first showcased at Artists Space (2012), then part of an evolving group show called The End(s) of the Library at the Goethe-Institut Library (2013). A year later, and by now filling four shipping crates, the collection landed in the UK to hang for a season within an eccentric structure designed by French architect Claude Parent at Tate Liverpool (2014). Next was a brief stint of “Open Storage” in the foyer of The School of Art & Design at LJMU (2015) with a single object on view every few weeks, followed by another iteration as part of the group show “Resource” at Bluecoat (2015).

In 2016 The Serving Library moved into its first dedicated space at the historic India Buildings in downtown Liverpool, then returned to LJMU’s Exhibition Research Lab in 2017, where it remained until late 2018. While resident at LJMU, objects from the collection were exhibited at CCA Glasgow and Kunsthalle Wien. At the end of 2018, the collection was installed at Nottingham Trent University’s Bonington Gallery, in visual dialogue with a new large commission by English artist David Osbaldeston. Since October 2020, 019 has a long-term loan on the collection. But since conditions at 019 are currently very wet and cold, the collection keeps on traveling…