In collaboration with LLS Paleis 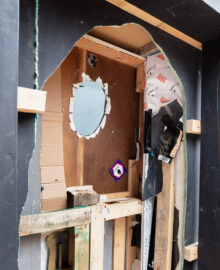 
EMBEDDED IN THE WORLD OF STIJN TER BRAAK

Although Stijn ter Braak (Groningen, 1995) studied painting at the Royal Academy in Antwerp, we know him mainly for his monumental sculptures and installations. Ter Braak shows rooms from his everyday environment by recreating the objects (“stuff”) that surround him using found waste material. Recovering and recycling these things by turning them into artefacts, he imitates many of the objects that shape his living environment and places them in the world of art. In this sense Ter Braak does not create new or original forms but copies existing objects, however mundane (a thrown-off shoe, a messy sock bin, a mobile phone with a damaged screen, etc.).

The titles of the works contain the possessive pronoun “my”, followed by the space they refer to: my living room (2020), my bathroom (2021), my bedroom (2022). With this “I” perspective, Ter Braak shows his inspiration: the past two years, his focus on his own everyday surroundings, his own interior and his daily life indoors must have been more intense than ever. He seizes upon spatial limitations to develop a new body of work, embarking on an adventure whose impact can only be determined after the installation has been realised.

After misleading his spectators with virtuoso reproductions of “stuff” in my living room – his apple cores, especially, are hardly distinguishable from the real thing – he took up a new challenge with the next work: to investigate the extent to which we see with our eyes. The mirrored reality in my bathroom confused and surprised many spectators because it confronted them with how the brain fills in what the eyes don’t see: there was no mirror. Stijn ter Braak manages to demonstrate that when you’re duped by an illusion, you have not only watched with your eyes, but also with something else in the brain: a memory, a habit, expectations, … It’s not Stijn ter Braak who deludes us; we delude ourselves by filling in something that isn’t there.

Stijn ter Braak is interested in the re-makeability of things: the entire contents of the house, food leftovers, plants; whether they are industrially manufactured items or elements of organic origin, he imitates them. Some objects look more attractive in ter Braak’s version, most, however, are a degraded representation. The bleak multitude of so many superfluous things we think we need to surround ourselves with shows the excess of a blind, purely growth-oriented economy that is always ready to create new needs in order to make people buy recently developed products. This multitude certainly reaches its climax in my bathroom, the place par excellence of extra creams, ointments and cosmetic products.

The monumental “extension” in wood, plastic and cardboard (these are the materials that immediately catch the eye) that we see from below when entering 019, resembles the famous Flemish koterijen, houses with extensions built on shoddy extensions. It is also reminiscent of slums, where dumping-ground rubbish is refurbished into building materials. Here and there, we discover supposedly unfinished cracks and holes through which we can peep in. It’s as if we have a view of something that we are not supposed to see from this side.

After climbing a staircase, we’re invited to stick our heads through a hole, and that’s where Stijn ter Braak shows us my bedroom. The focus of the work is the gaze itself: the visitor is put in a recumbent posture while standing. We’re not only in the artist’s bedroom, we’re in his bed, our head is on his pillow! Despite the personal surroundings shown by ter Braak and suggested by his bedroom, the interior is both intimate and universal. From this limited perspective, the watching can start. The freedom of movement is minimal. A moment of confusion. The visitor becomes the experiencing self and is now playing a role in the work of art, the leading role even. As the spectators only know this one perspective, they don’t have a complete overview. They are embedded in the world ter Braak has created, and what they take in looks so plausible that they soon forget the strange location and corresponding perspective.

Instead of dwelling on this disturbing perspective, one begins to notice certain small things. Who doesn’t know this experience? Doesn’t this lying-on-the-back looking around give everyone a feeling of déjà vu? The fixed place of things we look at again and again. Anyone who travels often and spends the night in different bedrooms, knows the feeling of disorientation at some point during the night or in the morning, of confusion over where they’ve just woken up.

Is everything still the same?

This work by Stijn ter Braak speaks only of itself. It doesn’t refer to a world outside; there is only the here and now and the experience thereof. Introspection given form. For some, this may evoke a feeling of boredom, or even loneliness, of being locked up; others may experience the relaxed lying down and doing nothing as a blessing, as the antithesis of a hectic or overfull life. All visitors to the exhibition will, however, share the individual experience that is made possible only through their physical presence. At a time when digital “sharing” turns the most intimate of spaces into a performance stage, this physical presence is a basic condition for fully experiencing the work’s physical virtual reality.

This 90-degree-tilted diorama, which shows a possible reality, evokes the atmosphere between sleeping and waking. It’s a bizarre fata morgana, an evoked and constructed world, minimally provided with a few characteristic attributes.

Ter Braak’s attention to the banal, the concrete and the ugly takes shape in a plastic manner. He demonstrates that the representation of matter can be achieved by pointing out a few suggestive and distinguishing features. As a “completer” of the work, the spectator does the rest. Ter Braak calls his objects suggestions rather than reconstructions. In spite of his minute attention to detail, the work remains a representation of reality that is chosen by the artist. Curious about or fascinated by what the contents of a room tell us about its user(s), the visitor registers and examines these contents and tries to picture that user. Stijn ter Braak confronts the spectators with their voyeuristic tendencies.

Tilted, our perception of the objects is limited. This too Stijn ter Braak addresses. Whereas his previous “stuff” was given a quasi-perfect finish, this is more of a suggested setting. In my bedroom, ter Braak does not strive to complete the illusion. That much is clear when we are back downstairs and look through the gaps in the large construction. The objects are only finished insofar as they are perceptible within our field of vision through the peephole. A few centimetres further, the plant has long ceased to be a plant; the window and the coat rack all cease to fulfil the function that was necessary for them to be perceived as such from the pillow.

The outside’s rough seams, unfinished parts, robust nails, plastic, and the spotlight that provides the light in the room through the window disrupt the viewer’s gaze for a second time: behold the dismantling of the optical illusion. With this insight into the construction of his illusionary game, Stijn ter Braak makes all the characteristics of his work visible. And now, the banality from up there is – literally and figuratively – far away.

Perspectives are keys to ever-changing insights. By discreetly showing the creative process, ter Braak leaves it up to us to decide how we want to relate to the work. He is a mere facilitator, a master of ceremonies who satisfies humankind’s desire to see what they want to see.

The range of perspectives in this work is so advanced that the visitor may become aware of other, more far-reaching shifts in our time.

His room, a proper room for a human being, only somewhat too small, lay quietly between the four well-known walls. […] Gregor’s glance then turned to the window. The dreary weather – the rain drops were falling audibly down on the metal window ledge – made him quite melancholy. “Why don’t I keep sleeping for a little while longer and forget all this foolishness,” he thought.

Created with the support of the Mondriaan Fund, the Flemish Government and the City of Ghent.
Thanks to Lina Suenaert, Jan Tromp, the 019 team, Thor Vermin and all illegal dumpers in Antwerp.