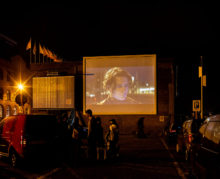 ‘Wat voor fiets met verchroomd stuur achter bij de aanlegplaats?’ is a short audiovisual story about a young man who goes out to visit some friends one evening after leaving the cinema. How is it possible that they miss out on each other?

The new short film  by Belgian filmmaker Robbrecht Desmet will be projected onto the billboard against 019’s facade. A grandstand – the size of a car – occupies one parking space and provides the public with a seat in the middle of the parking lot.

Robbrecht Desmet (°1985) lives and works in Brussels. He studied cinema and fine arts at Sint Lukas Brussels. His films have been presented at filmfestivals such as Courtisane Festival, BFI London Film Festival, International Film Festival Rotterdam, Kurzfilm Festival Hamburg, Brussels Art Film Festival, and in screenings and exhibitions Beyond The Picturesque (S.M.A.K. & Artcinema OFFoff), Documented Now! (de Brakke Grond, Amsterdam), An Evening with Auguste Orts(Beursschouwburg, Brussels). He has been artist in residence at Capacete Int. in Rio de Janeiro and Sao Paolo and at SIC (SoundImageCulture) in Brussels. He is lecturer Film Studies and coordinator of the MA film directing programme at the Film Department of the LUCA School of Arts in Brussels. He is currently working on a PhD in the arts on lived space and mise-en-scène.

Robbrecht Desmet’s ‘Wat voor fiets met verchroomd stuur achter bij de aanlegplaats’ is the fourth instalment of P, a series of exhibitions and events on the idea, the functioning and the aesthetics of the parking lot, curated by De Cleene De Cleene. As an area where cars or other vehicles can be left temporarily, the parking lot is a site that stockpiles potential. It is an aside to the road and to the romantic idea of travel, and a necessary counterpart to the modern preoccupation with speed. It is a secondary place that often goes unnoticed, a landscape at the service of a department store, an amusement park, a factory, a journey. Once an ‘enclosed preserve for beasts of the chase’, it has become an increasingly questioned, regulated yet volatile landscape. It is a patchwork incessantly formed by aesthetic, functional, ecological, political and economic strategies. It is a place of temporary stagnation at the service of movement, a grid that gathers and structures objects, people and stories in a continuously changing puzzle.

The line that connects A to B, pauses at P.