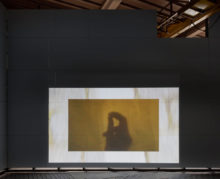 Spelling P is an installation that addresses language from the perspective of its units: characters and sounds. The act of spelling pauses the chain of meaning to closely examine one piece at a time. It opens up the possibility to insert another text between the characters.

During a residency on experimental writing, someone asked Maíra Dietrich to paint a sign on a facade. ‘Estacionamento’, it said – parking lot. Recounting this anecdote serves as the starting point to examine the linguistic patterns and rhythms underlying parking lots.

As an area where cars or other vehicles can be left temporarily, the parking lot is a site that stockpiles potential. It is an aside to the road and to the romantic idea of travel, and a necessary counterpart to the modern preoccupation with speed. It is a secondary place that often goes unnoticed, a landscape at the service of a department store, an amusement park, a factory, a journey. Once an ‘enclosed preserve for beasts of the chase’, it has become an increasingly questioned, regulated yet volatile landscape. It is a patchwork incessantly formed by aesthetic, functional, ecological, political and economic strategies. It is a place of temporary stagnation at the service of movement, a grid that gathers and structures objects, people and stories in a continuously changing puzzle.

Solo exhibitions: VISÃO PERIFÉRICA at Paço das Artes, São Paulo, and ESCRITO in Fundação Cultural BADESC, Florianópolis. Group shows at Musée des Abattoirs, in Toulouse, France and Convent in Ghent, Belgium. Dietrich participated in residencies at Casa Tomada in São Paulo, Proyecto ‘Ace in Buenos Aires and AFFECT em Berlim. Since 2015 she collaborates with Casa do Povo, São Paulo, where she developed the project Anecdote Workshop in 2017. Since 2012 she runs the independent publishing label A Missão.

The line that connects A to B, pauses at P.