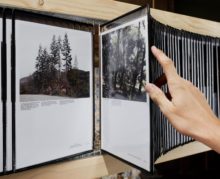 B. Two explanted pacemakers taking each other for a heart

C. The restored masts of the San Juan Bautista

Reference Guide is a collection of entries, connected and fueled by cross-references. These not only determine the characteristics of the encyclopaedia and its use, but they are also the mechanism behind its expansion. All* entries are transcripts of moments when objects and technologies challenge the strict boundaries that apply to them and emphasize their transitory nature.

*Although the main focus of Reference Guide lies within these moments of technological candour, the encyclopaedia demonstrates a surprisingly high interest in characters and phenomena along the side-lines of these episodes and displays a severe tendency to digress.

Along with Reference Guide, MDC shows photographs from -scope (2015): a series on viewpoints as a multiple intervention in the landscape.

On September 17, the book F#1-13 by Arnout and Michiel De Cleene (published by Art Paper Editions) will be launched and presented in the Museum Of Moving Practice.

Reference Guide is a reserach project at School Of Arts/KASK, Ghent