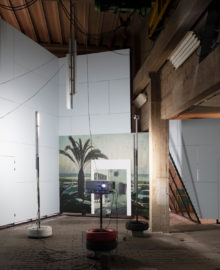 The first time I saw TROPICAL NIGHT by Max Kesteloot, was when I visited him at the brutalist Villa Van Wassenhove by the Belgian architect Juliaan Lampens near Ghent. Max had been invited by the Museum Dhondt-Dhaenens to spend the week in the villa as an artist-in-residence, where he took the time to work on the film, among other things. At that moment, the project merely existed in the form of a soundtrack and a draft version of a script. The soundtrack was saved in a Spotify playlist and titled ‘Notte tropicale’, one piece of the three-part composition Impressioni brasiliane by the Italian composer Ottorino Respighi. Max told me the story of the piece, which Respighi composed on his return trip by boat after a visit to Rio de Janeiro. Later, at the Brazilian première, the composition would be criticised for its lack of affinity with the specificities of Brazilian music, but Max could appreciate Respighi’s approach of improvising a whole score from fragmented impressions after a presumably wild night in Rio. The built-in speakers of Max’ laptop produced floating sounds that bounced off the concrete walls of Lampens’ bachelor villa, suggesting a tropical atmosphere that apparently had very little to do with the actual life in Brazil. The anecdotal information raised questions on the identity or essence of a place and, with Respighi’s orchestral tone poem in the background, the conversation turned to whether my coffee needed milk or sugar.

The script, on the other hand, was still a document on his computer, typed out in different colours to situate the different layers. The first-person narrative described Respighi’s musical struggle, but also evoked scenes of Benidorm, that mass-tourist destination along the Spanish coastline. The scenes still had to be shot and edited, yet without ever having been there, I could imagine the atmosphere of the city, its sunburnt beaches filled with wine-drinking tourists by day, and the neon-lit streets disturbed by drunken teenagers at night. I, too, had heard the stories of this decadent tourist spot, the rumours and hearsay, the stereotypes and clichés. All the way at the end, the text was signed by Max, including a time and place of writing: on a train from London to Brussels.

Some weeks later, Max sent me a first version of the film via WeTransfer. A few days before, he had e-mailed me from the airport in Alicante to say that he had been able to shoot all of the scenes and that it was only a matter of time before all of the elements — music, video, text — would come together. In the mean time, his Instagram stories had published suggestive sketches and on-site snapshots of the project, announcing the film before it had even fully materialised. As such, this very film — by the time you are reading this, a completed project — took its shape gradually, in bits and pieces, parts and fragments, over days and nights, from Ghent to Brussels and London, in his studio in Ostend and on-site in Benidorm, in sketchbooks, playlists, text documents, camera memory cards, and on trains, airplanes and social media accounts. It would be pointless to try and interpret these contingent circumstances as a biographical explanation of the authorial intentions underlying the work. Instead, they merely give anecdotal evidence of a more widespread condition, not only of contemporary artistic production, but of general social conditions as well. This fragmented instability of time and space — which can be seen both in the production process and in the work itself — has been described by, amongst others, the Polish-British philosopher Zygmunt Bauman as ‘liquid modernity’. Our daily navigating of a globalised world, both physically and virtually, undermines the singular and stable identities of specific places, and opens them up to multiple and more individual meanings and narratives. Different places blend into each other, Brazil becomes Italy, Ostend becomes Ghent, impressions become fading memories, and fixed identities become fluid. As the textual voiceover in the film itself states: “… one’s imagination always has a helping hand in reconstructing an occasion or a moment.”

When I visited Max at the Villa Van Wassenhove that day, he not only showed me the film, but we also talked about his recent production of Fragments, which temporarily covered the floors and walls of the house. Since 2018, Max has been consistently making these Fragments, recycling older photographic work into new images. The photographs are printed out, teared apart, and re-assembled into new compositions: glued together on MDF boards, framed by borders of paint, and sometimes with written lines hinting at possible scenes or dialogues. But as Bauman writes: “What has been cut apart cannot be glued back together. Abandon all hope of totality, future as well as past, you who enter the world of fluid modernity.” Max does glue the fragments back together, but the tears along the edges remain visible, and although a border of paint frames these fragmented assemblages as singular images, any idea of a resolved totality remains absent.

Walking around the concrete interior of the villa, up and down the stairs that connect the various split-levels in the open space, Max showed me different Fragments. To him, they are primarily about composition, about the formal construction of the image. They follow an associative logic, focused on visual associations rather than contextual correspondences. Yet, in doing so, the works, which combine the fragmented photographs of distinct urban and architectural places, produce new places, released from their stabilised identities in space and time. They do not propose any meanings or narratives themselves, but offer an environment to project new ones into. They situate the viewer in a multi-layered reality, not readily available, but as an environment that can be navigated, precisely because of the cues and hints provided in their fragmented nature.

As such, the film, and by extension the recent production of these Fragments, defies any fixed historical or geographical identities. Following Respighi’s experience, and with his ‘Notte tropicale’ as a soundtrack, TROPICAL NIGHT takes the viewer on a trip to Benidorm, that mythical place along the Spanish coastline. Yet, instead of the stereotypes and clichés we all know, the film recovers a different layer of the city. The scenes show its mundane and everyday environments, remarkably devoid of any such stories. By focusing on nothing in particular, its environment opens up to more personal narratives, beyond any preconceived judgements. The film is not about capturing the essence of a place, but about questioning whether there even is such a thing. And if there is, whether the essence of a place is not merely to be found in the distorted memories, impressions and experiences of the people who have once been there. As I left the Villa Van Wassenhove that night, through the wooden sliding door underneath a concrete portico, it became clear that despite Lampens’ architectural intentions, the impression I now have of this famous piece of modernist architecture has become fragmented and re-assembled into the fading memory of that coffee with milk I drank that afternoon.

Bart Decroos,
29 March 2019,
On a train between Antwerp and Brussels