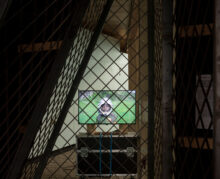 We are proud to present the ‘Pan African Flag For The Relic Travellers Alliance’ (flag series on our roof) by Larry Achiampong accompanied by ‘Relic Traveller: Phase 1’ (video-loop) inside 019. These works will stay permanently on view from the 15th of March until the 21st of April.

Larry Achiampong’s solo and collaborative projects employ imagery, aural and visual archives, live performance and sound to explore ideas surrounding class, cross-cultural and post-digital identity. With works that examine his communal and personal heritage – in particular, the intersection between pop culture and the postcolonial position, Achiampong crate-digs the vaults of history. These investigations examine constructions of ‘the self’ by splicing the audible and visual materials of personal and interpersonal archives, offering multiple perspectives that reveal entrenched socio-political contradictions in contemporary society.

Achiampong’s recent project titled ‘Relic Traveller’ is a multi-disciplinary multi-site project that builds on themes of lost testimony, fallen empire and displacement by deconstructing the architectures of colonialism. The project is currently formed of a ‘First Phase’ involving an original score, two short films and installations, an audio-visual performance and a flag project which recently displayed atop Somerset House in London.

PAN AFRICAN FLAG FOR THE RELIC TRAVELLERS ALLIANCE explores Afrofuturism and African diasporic identity. The design features 54 stars that represent the 54 countries of Africa, while the colours green, black and red reflect its land, its people and the struggles the continent has endured, respectively. The field of yellow gold represents a new day and prosperity. Achiampong has configured these Pan African colours and symbols into a form that is suggestive of a human figure in flight – an Afrofuturistic icon moving towards unity and equilibrium. The work does not frame Pan African Futurism as a utopian vision of the African continent, but one that considers aspects of responsibility in relation to the way that certain people live their lives.

In the short film Relic 1 a Relic Travellers apparates in sites across a seemingly desolate United Kingdom. Uncovering fragments of audible data presenting clue-like testimonies to a forgotten Empire, the Relic Traveller soon finds themselves in an atmosphere that simultaneously delivers poetic moments of the sublime met with increasingly harrowing claustrophobia and tales of trauma. Thus resulting in a familiar feeling of otherness, we are invited on a journey that embodies hysteria.