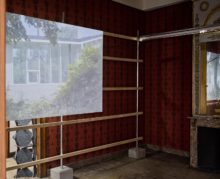 Representations of space cannot replace the experience with and within space itself. But sometimes the only way a building can be accessed is by means of media (photography, film, recordings). Our ideas and expectations of what architecture or cities, public and private spaces could or should be like are influenced by how we choose to represent them. Thus, in each such representation we can see not only the captured spaces but also our own gaze upon them.

Architecture is mostly a visual medium, even though no building is ever quiet. From its structure and infrastructure to its surroundings, buildings hum, drone, whistle, shriek and hiss. Architecture produces sound, whether voluntary or not. Every room sounds different, every space resonates. No building sounds the same.

Size and time are fixed parameters in factual, perceptible, empirical space. In film these parameters become variables. Actual Size Real Time is a project by Julie Pfleiderer and Miriam Rohde. They portray architecture and built space using filmic means. Through these portraits they not only want to show what a building looks like, but also and most importantly, they want to explore and expose how it can be looked at. For the first episode of Actual Size Real Time Rohde and Pfleiderer teamed up with with four emerging Belgian architecture offices. Partial Views features five different buildings which are similar in some regards: they are all residential projects in various degrees of completion, located in different parts of Flanders. However, the aim of the film is not to render a distinct impression of each building. Partial Views is mainly about looking at and from these houses. This looking is not neutral, linear, steady or ideal. It is affected by the circumstances: interrupted, repetitive, forgetful, curious, focussed or distracted, and above all mediated by a technical device, the camera. For the sound of Partial Views Rohde and Pfleiderer collaborated with the Belgian sound artist Peter Lenaerts. The entire soundtrack consists of sounds recorded in and outside the filmed buildings.

Julie Pfleiderer is a German director working across the boundaries of theatre, performance, film and video clips. In her work she explores the border of documentary and fiction. She is interested in the shift where fiction becomes truth and truth starts to be fictional. Julie enjoys collaborative processes where different media and approaches are put in dialogue to create friction out of permanent differentiation.

Miriam Rohde comes from Germany and currently lives and works in Brussels, Belgium. For ten years she worked as an architect in Berlin and in Ghent. Today she relates to her architectural background in her artistic and theoretical practice. With various media – such as text, film, installation – she reflects on (built) space, its use, making and ever-changing role in our present-day society.

Peter Lenaerts is a Belgian sound artist active in the fields of performance, contemporary dance, & film. Lenaerts is fascinated by empty spaces and invisible or acousmatic sound. Sound that doesn’t scream for attention but sneaks into the listener’s ear unnoticed. Sound without ego, pure sound, with a focus on the medium rather than the maker.