You are Here / You are Now 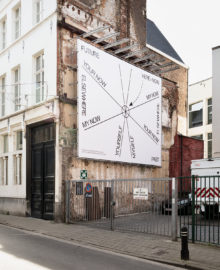 For a while now, Amsterdam-based graphic design unit Experimental Jetset has been exploring the language of diagrams, city maps, time tables, and clock dials. But instead of using this diagrammatic language in an objective, empirical way, EJ tries to employ this language in a more intuitive, poetic manner. For EJ, diagrams are ultimately open plans, spatial constructions that could (and should) be interpretable in multiple ways.

On the subject of their billboard, Experimental Jetset says: “City maps in public spaces often contain the indication ‘You Are Here’, usually accompanied by an arrow. When you think of it, that’s quite an existential message. We thought we could emphasize this sense of existentialism even more, by adding a second phrase: ‘You Are Now’. Because that’s ultimately where we all are: here and now”.

Added to that, Experimental Jetset’s billboard is also a reworking of a scientific diagram found in a publication from 1927 (‘The Nature of the Physical World’, by Arthur Stanley Eddington).