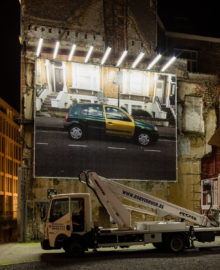 “So part of this debate is undoubtedly about ‘value’, existing value, past value, and future value. As a simple rule of thumb, I have myself evolved the notion that in dealing with historic buildings we should try hard not to remove any aspect of value, but that it is legitimate to add value.”

—Peter Burman, ‘A Question of Ethics’

Focusing on auto repairs where an identical part from another vehicle of the same model, but of a different color, is substituted, Eatock’s photographs focus on a practice in plain sight, on economic and transparent fixes. Recognizing a connection with art conservation—where repairs are meant to be visible rather than camouflaged—as well as with the Japanese art form of kintsugi, where pottery repairs are illuminated rather than hidden, Eatock elevates a thrifty practice to a place where it can be considered and appreciated as an aesthetic choice. Are these repaired vehicles richer, more valuable and better as a result of accident and repair?