The Half Life Of Facts 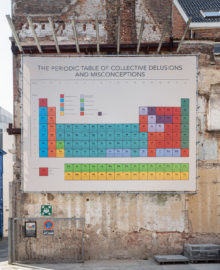 Conceptual interdisciplinary artist, Agnieszka Kurant explores how complex social, economic and cultural systems can operate in ways that confuse distinctions between fiction and reality or nature and culture. She investigates “the economy of the invisible,” in which immaterial and imaginary entities, fictions, phantoms and emergent processes influence political and economic systems. Kurant probes the “unknown unknowns” of knowledge and the speculations and exploits of capitalism by integrating elements of science and philosophy, and analyzing certain phenomena—collective intelligence, emergence, virtual capital, immaterial and digital labor, evolution of memes, civilizations and social movements, artificial societies, energy circuits and the editing process—as political acts. She explores the hybrid and shifting status of objects in relation to value, aura, authorship, production and circulation. Many of her works emulate nature and behave like living organisms, self-organized complex systems or bachelor machines.

Born in 1978 in Lodz, Poland, Kurant currently lives and works in New York City. She is the upcoming visiting artist at MIT in Boston (2017). Kurant studied in Lodz, Warsaw and London, and was awarded residencies at Palais de Tokyo in Paris (2004), ISCP in New York (2005), Paul Klee Center in Bern (2009), Location One in New York (2012), and Iaspis in Stockholm (2013). In 2009, she was shortlisted for the International Henkel Art Award at the Museum of Modern Art (MUMOK) in Vienna.

Among her exhibitions worldwide, the artist represented Poland at the Venice Biennale 12th International Architecture Exhibition (in collaboration with the architect Aleksandra Wasilkowska) with a pavilion presentation entitled Emergency Exit (2010).  In 2015, she presented a commission for the Guggenheim Museum’s façade. In 2013-2014, she presented her first major exhibition in New York at Sculpture Center entitled exformation.  In 2008, she presented a commission for Frieze Projects in London. Her work has been exhibited at MoMA PS1 (2013), Witte de With in Rotterdam (2011), Palais de Tokyo in Paris (2004), Tate Modern in London (2006), The Kitchen (2016), Moderna Museet (2015), MAMCO in Geneva (2006), Stroom den Haag (2013), MUMOK (2009), Zachęta National Gallery of Art (2009) and the Museum of Modern Art in Warsaw (2015), along with key exhibitions including Performa Biennial in New York (2013 & 2009), Momentum Biennale (2015), Moscow Biennale (2007), Bucharest Biennale (2008), and 2nd Ural Biennial (2012). Her films have been featured at film festivals including Kino der Kunst in Munich, CPH Docs in Copenhagen and Torino Film Festival.