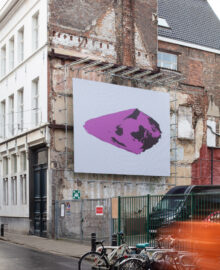 This work is part of a series of unusual world maps made using custom software created for Tauba Auerbach by programmer Jason Davies. The software was originally created to generate source material for a series of paintings and GIFs. The tool allows one to rotate the earth in any direction and flatten it using a wide array of projections, producing unfamiliar but mathematically accurate models of the earth.

This map was made using a sinusoidal projection, and the technique of cutting along coastlines rather than slicing through the middle of an ocean or a continent to unpeel the surface of the earth — The idea was first articulated by geophysicist and oceanographer Athelstan Spilhaus in the 1940s. This type of map keeps the oceans intact as a continuous body of water. In this particular rotation, the Southern Hemisphere is prioritized.

Tauba Auerbach’s work (b. 1981, San Francisco, California) addresses principles of topology, symbology, and logic, probing the patterns and slippages therein. Auerbach works in a wide variety of media including weaving, glass, photography, (3D) printing, bookmaking, and musical instrument design. In 2013, they founded Diagonal Press to formalize their ongoing publishing practice. Major shows of their work have been presented at the Museum of Contemporary Art, Cleveland; the Institute of Contemporary Art, London; and Bergen Kunsthall in Norway, which travelled to venues in Sweden and Belgium. In 2018, the Public Art Fund organized Auerbach’s acclaimed public project, Flow Separation, in New York Harbor. Auerbach’s work is included in the collections of the Museum of Modern Art, New York; Moderna Museet, Stockholm; and the Centre Pompidou, Paris; among others.

This billboard is a collaboration between Design Museum Gent and 019. It functions as an alternative exhibition platform for (graphic) designers. A leftover from the Museum of Moving Practice project that happened between the 18th of May and the 17th of September 2017, where 019 temporary occupied a part of the museum. This billboard is a copy of the Billboard Series framework that has been hanging at 019 since September 2015. (A project by artlead, All Things Contemporary Vzw & 019)

Each billboard stays up for two months.
The designers are selected by 019.