Part of the exhibition 'Off The Grid: Belgian Graphic Design from the 1960s and 70s as Seen by Sara De Bondt 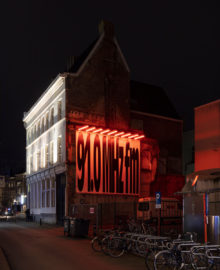 Phantom Radio is an ongoing project, a 91.0 MHz FM radio station (g)hosted by Ine Meganck and Valentijn Goethals. The project was originally initiated in collaboration with Paul Elliman (UK) at the Werkplaats Typografie school in Arnhem (NL), a former radio distribution center. Within the school a space was created, to re-locate the lost origin of the building. Hidden in a secret room above the kitchen, an acoustic window on a world alive with electro-magnetic activity awaited to be opened. The Phantom Radio became an unconventional space for students, designers, musicians and artists. A place where participants for a short period of time could trade the medium of printed matter and parasite the airwaves. Keeping in mind a series of limitations. Nowadays the Phantom Radio also functions as a nomadic radio station. The project isn’t tied to one specific location nor time-zone. Tune in now!