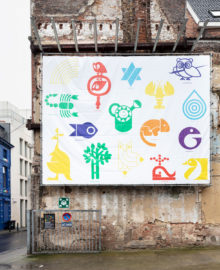 This billboard depicts sixteen logos created by seven graphic designers during the 1960s and 1970s in Belgium. Made for banks, restaurants, theatres, paint companies, museums and others, they are all pictograms with a reference to nature. Aimed at the many Christmas shoppers and tourists that walk past the museum every day, the selection’s subliminal message is a call for more awareness of our planet.

The billboard is produced on the occasion of the exhibition Off the Grid. Belgian Graphic Design from the 1960s and 1970s as Seen by Sara De Bondt at Design Museum Gent.