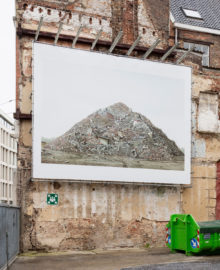 The photo collage memorial IV is part of a continuously expanding series of memorials, in which Filip Dujardin examines art-historical archetypes, incorporating them in new image compositions. Architectural fragments are extricated from their geographical context and time frame, and rebuilt in a new spatial environment. By combining elements of different architectural origins, he compresses (the architecture of) art history, creating new tensions.

The image compels you to contemplate it before you become aware of the improbability of what you are seeing. Fragments of demolished 18th century town houses, crumbled marble Corinthian columns from a Greek temple, and reinforcement steel from modernist high-rises with concrete frames and precast concrete units are all piled onto a large concentrated unit in the pixel heap. A mountain as a remnant or a memorial to a demolished imaginary construct.