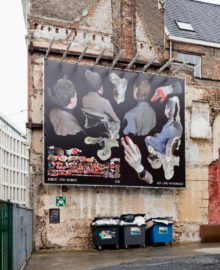 JUR
Robots of the world! The power of man has fallen!
A new world has arisen: the Rule of ‘Jobot und Robot’!
March!

ACT I
Central office of the factory of JUR

Entrance on the right. The windows on the front wall look out on the rows of factory chimneys. On the left more managing departments.

JOBOT is sitting in the revolving chair at a large American writing table. On the left-hand wall large maps showing steamship and railroad routes. On the righthand wall are fastened printed placards. (“‘JOBOT UND Robot’’s Cheapest Labor,” etc.) In contrast to these wall fittings, the floor is covered with a splendid Turkish carpet, a sofa, leather armchair, and filing cabinets. At a desk near the windows ROBOT is typing letters.


This billboard is a collaboration between Design museum Gent and 019. It functions as an alternative exhibition platform for (graphic) designers. A leftover from the Museum Of Moving Practice project that happend between the 18th of May and the 17th of September 2017, where 019 temporary occupied a part of the museum. This billboard is a copy of the Billboard Series framework that has been hanging at 019 since September 2015. (A project by artlead, All Things Contemporary Vzw & 019.) Each billboard stays up for two months. The designers are selected by 019.