Nothing Ever Lasts Forever 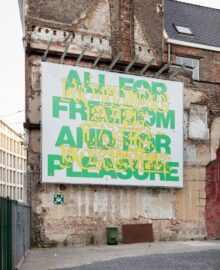 Political promises. Possible power. Manipulated altruism. Fake help. Possible changes. True dangers. Neverending speculations. Forced suggestions. Unfortunate consequences.
Who wants to rule the world nowadays? Its important more than ever to keep in mind that nothing ever lasts forever, as one great old lyrics says…
https://www.youtube.com/watch?v=aGCdLKXNF3w
Jiri Mocek (*1985) is graphic designer based in Prague, Czech Republic. After his studies at Umprum University in Prague and intership at UdK Berlin works as freelance. The designer’s portfolio spanning visual identities, poster work, book design, exhibition design and many other graphic applications mostly for culture subjects, institutions or collectives. Jiri pays special attention to typography in his work and type became a significant element in his portfolio. His wide spectrum of clients include vibrant culture names as Boiler Room, same as famous commerce agencies as Sagmeister&Walsh. Nowadays he pays attention to his upcoming graphic collective/studio, what launches soon. See his works here.