It Is an Imbroglio 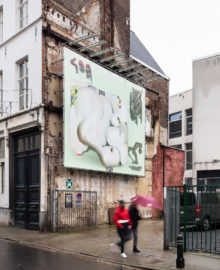 Kévin Bray’s work oscillates between several media – namely video, graphic design, and sound design – through which he questions the existence of the image and its (modes of) production. To what extent is a still image time-related? How do media and format interact and influence each other? He tries to understand how the form and language of a particular medium are visualized and manipulated, in order to impose those codes onto another medium. His interest lies in playing with the possible porosity created by confrontation and through this methodology he aims to open and diversify a language while exploring the edges of its possibilities.
Experimentation with tools plays a large role through his process, one might say within the work tools are pushed towards a phase of crisis. By being conscious of their authority over our way of creating as much as our interdependency and role within the cycles of production, Bray works with these forces while dynamically changing his attitude towards each phase of production, addressing it as a political act that breaks out of dogmatic cycles that determine the methods of creation. Willing to unveil the links and gaps between the several layers involved in the making of an image, Bray emphasizes in his videos the act of collage rather than montage, interacting with the backdrop and stage, and always at the edge of transparency and concealment, he toys with showing the viewer precisely how the work is constructed. Formalizing his own language through the modification of tools and behaviors, his work reflects the transformation of production processes and the alteration of their narratives, revealing their ability to force us to question our relation to materiality and reality, especially in current conditions where production tools are progressively dematerialized. He is an explorer, a craftsman of technologies, but his research is particularly based on popular culture. Machines and software containing the story of an era, a period of time.
These manifestations of tools and technologies shape our realities and languages, yet the first layer of culture they influence, is popular culture. Bray analyses popular strategies as he tries to understand the meaning generated by them. Once analyzed he recycles the codes and formulas used, in order to give a new perspective on those discourses by reapplying them within his work.