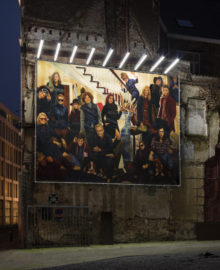 As graphic designer, Ine Meganck is fascinated by ghost families who often return within advertising. She collects, analyses and tries to reveal changes and patterns within these artificial families. For this billboard, Ine presents an enlarged winter advertisement of the brand ‘Tommy Hilfiger’. Some characters — the mother and father for example — always return through many years of different campaigns. But the art-directors have fewer problems with changing and replacing children and pets throughout the seasons. Although there is a lot of attention spent to produce absurd details such as the paintings in the background. These are custom-made to present the family tree as convincing as possible. This again contrasts with the fact that both grandmother, mother and grandchild are portrayed with almost the same youthfulness and style.

Ine stripped the family of their literal brand references and had the image painted on canvas, in this case by a trained Indian ‘paint-on-demand’ portrait painter. Ending up (again) with a dislocated family portrait that, because of its location and dimensions, seeks duality again with the world of advertising.