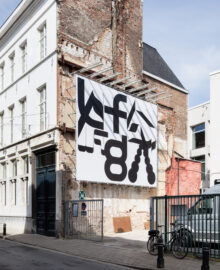 A project of 019 in collaboration with Design Museum Gent.
This billboard shows different typographic creations Lennart and Corbin sketched in their practice over the years. The forms are merging and overlapping each other in a fixed area of space, creating new unreadable characters. The billboard includes the typefaces Weimar, Monolog, Transport is Phuture and Oftest.

The billboard on the side of Design Museum Gent in Drabstaat is an ongoing project of the Gent graphic design collective 019, providing an alternative exhibition platform for graphic designers. Every design remains in place for 2 months. The 50 sq.m. billboard is all that remains of the exhibition project 019 — Museum Of Moving Practice from 2017, during which the collective temporarily occupied a section of the museum. Billboard is based on the Billboard Series concept on the wall of the 019 building in Dok Noord since September 2015 (a joint project of artlead, All Things Contemporary Vzw & 019).