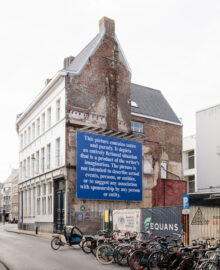 Almost every film or book in recent history includes some variation of the sentence: “This is a work of fiction. Any similarity to actual persons, living or dead, or actual events, is purely coincidental.” Accompanying this sentence, one can usually find a further line or two declaring that what follows is, indeed, what it claims to be, a fiction. That any semblance to the “real world” is “entirely coincidental”. Not partially coincidental, or occasionally coincidental, but fully and completely disconnected from the world of fact and law and civil authority the film or book or work of fiction so insistently claims to belong to.

Legal mechanisms such as copyrights, permissions and content warnings that typically make up a disclaimer thus act as a precursive setting to the fictive work, the entrance point into a world the creator has crafted and built, in which the audience will imminently immerse themselves. As such, the disclaimer introduces an unstable border between what is fictive and what is real. And yet these same disclaimers often betray the solemn, real-world forces they purport to serve, by transgressing the border between the laws of fact and science and the world of imagination, revealing themselves as part of a thin, fragile line between the two.

Historically speaking, the disclaimer was originally conceived to describe feudal tenants who wished to dispute their terms of service, hence its meaning being the repudiation of any legal claim. Disclaimers in the public realm first appear in the 18th century when copyright law and the commodification of literature into legal property became both a serious and sincere practice. This said, Restoration playwrights and novelists of the 18th Century, who feared retaliation from their audiences, offered a slightly adapted model to the standard disclaimer we know today, instead declaring their work to be something other than fiction. “Novels” of the period were categorised instead as histories, biographies, travelogues, or collections of allegedly authentic letters. As such, early fiction writers fictionalised their fictions into fact, and treated their works more as natural discoveries than created objects of their own invention.

Yet by the early 20th century, fiction was understood as fiction and fact as fact, with little accepted convergence between the two. Disclaimers were therefore adopted as a protective mechanism for these works of fiction, acting as legal obstacles to shield the creator from accusations of label or defamation. In doing also, they also came to represent a marker for where the “real” begins and ends, insisting on fiction’s total independence from the world of fact, from disciplines such as history, biography, journalism, and law, all of which inherently inform and organise a narrative. The disclaimer can thus be understood as both a vehicle, a permeable border, to play with fact-fiction boundaries in works of art, to transgress allegedly clear-cut barriers between what is “real” and what is “not”, as well as the merging of the discourses of science, law, and history, with that of imagination and invention.

The Literary Disclaimer: Law, Fiction, and the Real, Bill McDonald, 2001, The Fortnightly Club of Redlands, California

* Boy Vereecken is an Art-Director and Editorial Designer based in Brussels.