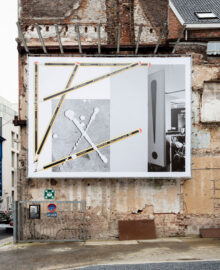 He has designed books for Melanie Bonajo, Koen Hauser, Elisa van Joolen, Adelita Husni-Bey, Price/Mathias Ringgenberg, and Matthew Darbyshire, and record covers for Total Control and Joanna Gruesome. He currently designs the graphic identity of the Kunstverein Langenhagen and its bi-monthly KVL Bulletin. Commissioned by the Architecture Academy in Amsterdam, him and Sandra Kassenaar design the next ten issues of Forum, a magazine published by AetA, a Dutch architect’s society. Success and Uncertainty – Back Up (2011) is the title of a publication Bart and Sandra Kassenaar made together in relation to an earlier made poster series. These were made in Cairo in 2011, in the early days of the Arab Spring, where the two lived while on an Artist in Residency at the Townhouse Gallery. Together with Rustan Söderling, Bart initiates Dark and Stormy, a fanzine for which he writes, while recruiting others to contribute also. They both edit and design the fanzine. In 2016/17, Bart was a guest professor at the Communication design department of the Hochschule für Gestaltung in Karlsruhe. He has been teaching design at the Gerrit Rietveld academy in Amsterdam and at the Royal Academy of Arts in The Hague since 2009. He occasionally teaches and conducts workshops in art school and institutions, such as the University of Seoul, South Korea; Cranbrook Academy of Art, Detroit; The European Academy of Art in Brittany (Eesab), Rennes; MMOMA, Moscow; Boomtown festival in Ghent.

This billboard is a collaboration between Design museum Gent and 019. It functions as an alternative exhibition platform for (graphic) designers. A leftover from the Museum Of Moving Practice project that happend between the 18th of May and the 17th of September 2017, where 019 temporary occupied a part of the museum. This billboard is a copy of the Billboard Series framework that has been hanging at 019 since September 2015. (A project by artlead, All Things Contemporary Vzw & 019) Each billboard stays up for two months.

The designers are selected by 019.