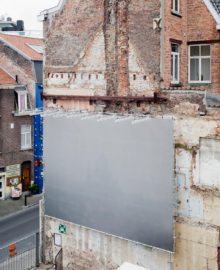 Lydia Debeer’s work is often ambiguous. The images she uses evoke a reality that is susceptible to more than one explanation. Her work poses the issue of the reliability of perception and the interpretation of reality. Does reality determine what we perceive, or is it the other way around, and does our perception determine reality? Only by means of perception and experience (that consists of repeated acts of perception), are we capable of building up a world view that coincides with our intuitions, such as our sense of gravity and balance, the difference between up and down, light and dark, front and back, left, right, space and movement, etc.

Every one of Debeer’s works contains a secret that only allows itself to be unravelled along the way. Her work is apparently simple and usually it looks as if there is little or nothing going on. The image is static and apparently without development. There is no conclusion, solution, release, and there is no good or bad ending.Every work by Debeer can be seen as a closed circle. Ending and beginning pass into one another, unnoticed, like an endless repetition of the same pattern. And yet nothing stays the same, because the viewer of the work sets out to look for something to hold onto, for hidden meanings, for the significance of what has been seen. The viewer recreates the work in the context of his own experience and the work obtains—as a new experience—a place in the viewer’s worldview. As such the continuous repetition of the same does not equal a predictable future, but it can signify an enrichment of the viewer’s own development.  — Frank Lubbers