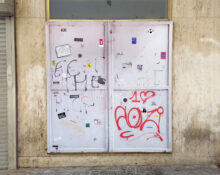 019 is an artist collective operating from a former welding factory in Ghent, Belgium. The main entrance to the building is a two-part steel sliding door. Between the moment when the building was annexed in 2014, and the opening of the building to the public, the door was used as a canvas for a graffiti slogan – ‘Eat the rich’. As such, even before the building started lending itself to exhibitions, performances and concerts, it had changed in an unforeseen way. The anonymous artist’s phrase was appropriated and functions as the collective’s logo ever since.

For BAD DOORS, 019 presents a photographic reproduction of its tagged door (as it was on April 20th, 2021), with the Eat the rich tag of the former welding factory’s door figuratively and literally confronting the former Brussels’ stock market. While the Ghent door changes on its own pace – the original tags increasingly fading away due to precipitation, pollution and new tags – the Brussels version heads of, simultaneously, in a different direction.

In the course of 2 months, the door will become an exhibition platform, on which invited artists will present a unique work in the form of a sticker. In the meantime, and complementary to the curated additions, the photographed-door-as-exhibition-platform becomes a medium for unexpected and unsolicited additions of anonymous passers-by.

EAT THE RICH does not open up to a different room, or seal off an entrance. It functions as doors mostly do – as an inconspicuous part of our built surrounding, awaiting to trace those walking by.

* Sticker contributions originally made in 2016 for the escalator steps of the Maastunnel in Rotterdam, a tunnel that divides the two sides of the city. For a portrait of the stickers in their original escalator setting see here and here. These Rotterdam stickers were curated and produced for the project Roltrap by Action (Ilke Gers & Quenton Miller).