THE OWL IN DAYLIGHT

THE OWL IN DAYLIGHT is an exhibition by Daniel Frota (Bra) and Pedro Moraes (Bra) exploded in several scattered interventions and performances throughout the year, that might or might not overlap in time and space. Its presence is mostly transitory, but at times also permanent. Its morphology will be diverse, its presentation hovering between discrete and continuous, between words spoken loudly or softly. A structure that allows itself to be constantly reevaluated and thought about in different terms while it is standing up, and hopefully it won’t fall apart, but if it does, then we are still faced with the same question of “how to build a world that doesn’t fall apart after three days”.

THE OWL IN DAYLIGHT is originally the title of an unwritten book by Philip K. Dick. The novel only exists in the form of an interview transcription from 1982, the year of the author’s death, in which he describes the whole plot. The book is narrated from the viewpoint of a character living in a place where there is no atmosphere. Since there is no sound whatsoever, speech has never been developed. No words, neither verbal communication as such—the non-existence of the book tells us about the trap the author created for himself in an attempt to build a world that escapes his sensorial and linguistic condition. Now that the author is detached from his senses and doesn’t have a body anymore, the book can finally be written.

— You used a scalpel! That’s why you could write as if you were making a surgery. Imagine using a tree trunk to trace a line. This is in fact my favourite writing tool! The words get really really blunt, true. But at least they become visible! Large! Your words would gain an expressionist style, so to speak.
— So, what your saying is that my scalpel lacks expression, while this tree trunk that you’re holding lacks precision.
— Not only that! Your scalpel makes things too clear, too clean, you know. And that’s because your movements are all contrived, small. You are moving only your wrist.
— Huh, so, how do you call all these unintelligible scrawls you’re writing with your tree trunk? How do you call this total mess? Freedom of expression?
— I prefer to call it opacity.

This project is made possible with the generous support of Amsterdam Fonds voor the Kunst and Smoke & Dust. 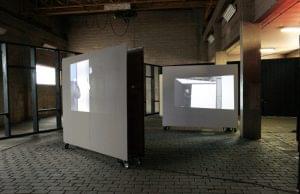 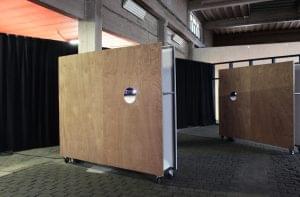 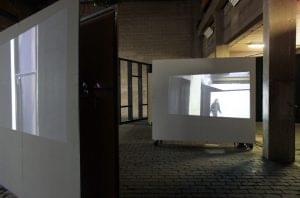