September 18th marks the inauguration of Billboard Series with work of the Catherine Biocca (°1984, IT), accompanied by an evening curated by the artist. Catherine Biocca will give a talk on her practice and has selected performances by Mercedes Azpilicueta (AR), Liv Schwenk (DE/US), Victoria Wald (DE) and Geo Wyeth (US).

In her work, Catherine Biocca merges different levels of dimensions, reversing and swapping diverse media to generate an unfamiliar reality. The result is a mix of bi- and tri-dimensional elements dealing with displacement, layered with cartoonish imagery and details from science fiction, and boasting a view on human brutality throughout our cultural history.

The characters in her works call to mind cartoons or animated figures that are embedded in uncomplicated events and simple settings, burdened by the comic brutality inherent to their existence. Biocca stretches the moment of recognition to absurd lengths, questioning why we accept violence as a form of entertainment. “Schadenfreude” – an untranslatable German term for the pleasure derived from the misfortunes of others – forms the basis of her research.

Exploiting an unprocessed and raw form to question a rather violent – and yet tremendously entertaining – side of life, Biocca understands art as a tool to reveal the emptiness and nonsense of life as its only real sense. The violence Biocca exhibits is nevertheless treated with so much humour and wit that one cannot but happily embrace her cruel universe with guilty pleasure.

The low-fi character of her work occupies a wide variety of media, ranging from drawings made with industrial markers on waxed cloth to computer animations, and from space-filling installations made of tape and pvc to lazer drawing on styrofoam.

For her on-going series 100 Better Ways to Die, Biocca asked a real estate manager (who has nothing to do with the art world) to imagine and draw 100 ways to die. She then reproduces these drawings in their actual size by scratching them in aluminium panels painted with automotive paint. Typical of Biocca’s oeuvre, the panel works evoke a plethora of associations that in the end reveal man to be a cruel child – as capable of violence as it is of beauty – taking it all in, spitting it out again, tongue in cheek.

For the first commission of Billboard Series, Catherine Biocca proposed National Character, in which an animated head of a classic sculpture winks at passersby. It is an extension of Blushing Sculptures, a series of drawings from 2013. This series developed from Biocca’s research on classical Hellenic sculptures and depicts these sculptures as ashamed of their nudity.

Biocca is interested in how there is no real emphatic bond with a sculpture that represents a realistic – even perfect – naked human being, while at the same time our identification with cartoon figures on television is undeniably strong. This anthropomorphic approach is a continuation of the disturbed of the specifics of different media that is so characteristic for her practice. A statue has no emotions, it does not move and it certainly doesn’t wink at you when you pass by.

The combination of an image of a classical Greek sculpture (the image of Meleager, one of the Argonauts), centuries later appropriated by the Romans and currently in the collection of the Kunsthistorisches Museum in Vienna, and the overlaying text “National Character” naturally also poses questions on what defines a national identity. The subtle reference to the origin of our civilisation and the displacements of its artefacts throughout history, places the current European debate of migration in a broader historical context.

But while the nature of a billboard normally is one of statements – one of telling you what you need or what solves your problem – Biocca’s Meleager knowingly takes an enigmatic stance. Rather then proclaiming an idea, it poses a question. It retains an open structure of communication, clearing space for the ideas of the viewer. In winking at you, it makes you an accomplice to its questioning.

Catherine Biocca studied political science in Rome and obtained her Master under Georg Herold at the Kunstakademie Dusseldorf. She has exhibited at, amongst others at Museum Kunstpalast, Dusseldorf; Galerie Martin van Zomeren, Amsterdam; Basis, Frankfurt; Galerie Tatjana Pieters, Gent, Silberkuppe, Berlin and Ginko Art Space, Beijing. Upcoming exhibition include Frutta, Rome and ***. Catherine  Biocca is currently in residence at the Rijksakademie van beeldende kunsten in Amsterdam.

Friday September 18. An evening of lectures and performance

For the inauguration of her billboard, Catherine Biocca has curated an evening of lectures and performances. She will give a lecture on violence in cartoons and how this relates to her own practice, and has invited four artists to perform new or existing works.

Mercedes Azpilicueta’s work addresses the ambiguity of a collective subjectivity, applied to a rigorous formality as it experiments with the sound and the affective quality of language. Departing from her own peculiar resources and obsessions, language, body and voice are three things that define Azpilicueta’s work. By merging poetry, everyday communication, appropriation, memory and repetition, she tries to develop a more cohesive and emancipatory practice that is informed by and embraces a discourse of alterity.

Subitus Valentine is a work in progress that takes the form of a declamation. It is inspired by the figure of Valentine de Saint-Point, an artist and a poet who wrote the Manifesto of Futurist Woman – ushering women to return to sublime instincts, violence and cruelty.

Azpilicueta’s work has been presented amongst others at Museum of Modern Art, Buenos Aires; IMMA, Dublin; Van Abbe museum, Eindhoven; and at Tales of the Hub and Witte de With in Rotterdam. She participated at the poetry readings at Documenta13 in Kassel, curated by Raimundas Malasauskasen and Didem Yazici. Mercedes Azpilicueta is currently in residence at the Rijksakademie van Beeldende Kunsten in Amsterdam

Through media performance, video, drawing, painting and choreography Liv Schwenk seeks a physical confrontation with the surrounding space. In her bodily interaction with architecture, she is directed by parameters such as time, illusion, imagination and courage.

In Vertical Diagonal Crossing, Schwenk responds to the space at 019 by using the building structure to create a mid-air crossing of lines. This spatial gesture can be seen as an affirmation that space, time and the body exist.

Liv Schwenk studied at the Art Academy in Düsseldorf and now divides her time between Düsseldorf, Stuttgart, New York and Portland. In 2014 she received a grant by the DAAD to study dance in New York City. Her work has been presented, amongst others, at Volx Galerie, Dusseldorf; the Quadriennale, Dusseldorf; Lateral Art Space, Cluj; Institute of Art History, Bonn and the Kathmandu Contemporary Art Centre in Nepal.

Victoria Wald’s video and performance work is mostly about (female) society, our hopes and wishes, and how we’re able to do and believe the most absurd wrenches to satisfy someone else or ourselves or think we must behave. Wald’s performances are direct and often improvised, paying tribute to the infiltration of everyday life. As such, humor, sex and oversubscription play important roles in her work.

In her performance The Saddest Songs in the World (with regard to Guy Maddin) a mermaid is towing herself out of the sea, lamenting about her solitude and the impossibility of a relationship, singing old Brazilian songs.

Wald studied Arts and media Arts in Düsseldorf, Salvador da Bahia and Munich and will graduate in the class of Prof. Stephan Huber at the ADBK, Munich in January 2016.

Geo Wyeth is known for evocative, narrative songs and high-energy, empathic performances and video, which center on the modulation and manipulation of voice and body. Dark, queer, and sharp-edged, with clear-eyed criticism of social mores embedded within them, Wyeth’s performances channel different personae of those, both deceased and alive, that the artist knows intimately or only imagines a connection with. Wyeth’s work consistently questions the way technology mediates our sense of our bodies and our sense of self.

In You’re making a mistake the prime suspect is moving through a parking lot and arrives in a dumb singlet to be flogged by a baked sinister sadness.

Wyeth’s work has been presented amongst others at the LA MOCA; The New Museum & MoMA PS1, NYC; ICA Boston; The Studio Museum in Harlem; and Ellen de Bruine Projects, Amsterdam. Geo Wyeth is currently in residence at the Rijksakademie van beeldende kunsten in Amsterdam.

The inauguration of our first Billboard Series coincides with the opening of Leonor Antunes’ exhibition “I Stand Like A Mirror Before You’” at Kiosk. Combine your visits! 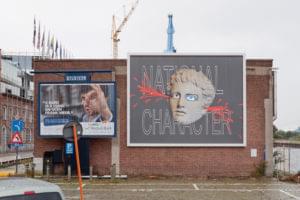 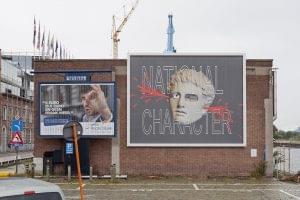 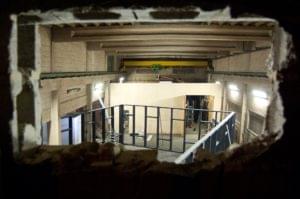 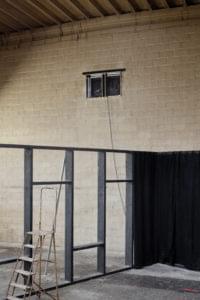 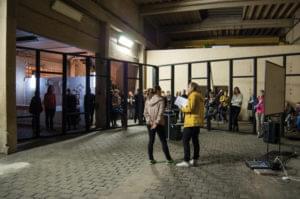 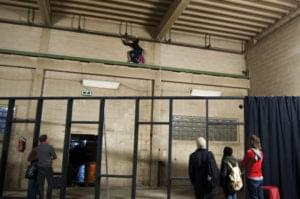 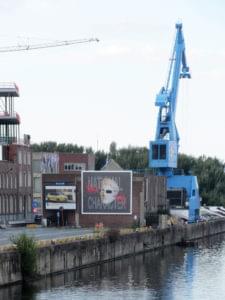 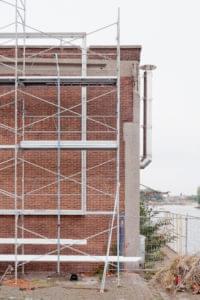 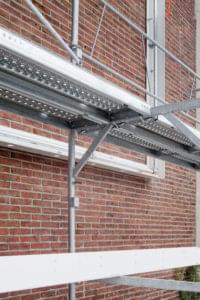 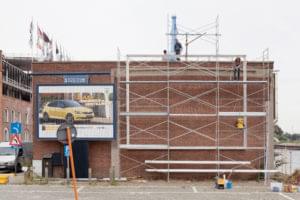 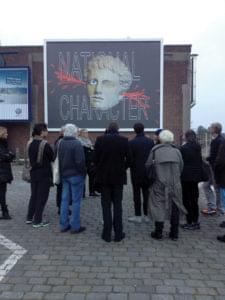