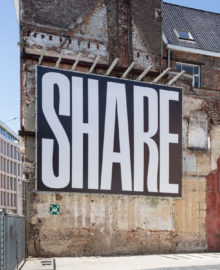 Feeds glide before our eyes, fingertips tap-dance on glass surfaces and while we scroll deeply into an endless universe, we view, tag, like and comment. Publishing became posting and posts appear on walls and in groups. The vocabulary, with which the software on our computers and phones talks to us, is full of metaphors related to the physical world. A story can mean different things now.

Ines Cox (°1987) is a Belgian graphic designer running her own independent studio in Antwerp. In 2009 she graduated from Luca School of Arts (Ghent, BE) and continued studying for a second Master course at Werkplaats Typografie (Arnhem, NL). She has been collaborating with a wide variety of artists, institutions and brands on both printed and digital matter. In her practice, commissioned projects run parallel to self-initiated autonomous work and research. Once a week Ines teaches Typography at the Graphic Design department of the Royal Academy in Antwerp and from January 2017 until the end of 2018 she has also been a researcher there.